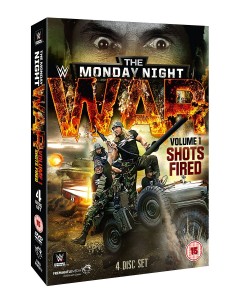 Monday Night War Vol 1: Shots Fired (WWE DVD)
Yet again WWE have felt the need to rake the Monday Night Wars of the 1990s over the coals and do some more navel gazing about the Attitude Era and the fact that for 84 consecutive weeks WWE was not the top wrestling promotion in the United States. This time in the form of an episodic television show, first aired on the WWE Network and now collected together (at least the first ten episodes) on DVD and blu-ray.

Of the multiple attempts to tell the story of the Monday Night Wars over the years, there is no denying that this series is probably the best put together. Each episode is full to bursting with talking heads from across the brands, great footage of the most memorable moments and some interesting insights into the era — for example, WWE’s admission that their early attempts at taking on WCW’s cruiserweight division with their own light heavyweight division was a flop, because WWE fundamentally misunderstood what was appealing about Atlanta’s high fliers. Each episode picks a particular focus of the story and tells a compelling narrative of what both sides were doing to try and maintain ratings dominance, and we have episodes on all the things you would expect — the NWO and DX, Stone Cold Steve Austin, Bret Hart, Goldberg, the idea of Attitude — as well as some unexpected episodes, such as the aforementioned Cruiserweight one, and a cool look at the role both Undertaker and Sting played in their respective brands as steadfast and loyal locker-room leaders.
However, the fact remains that there is very little here that WWE has not shown and told us countless times. Even within the DVD set itself there is much repetition due to the original format of it being a weekly TV show, requiring recaps and scene-setters not needed when viewing in one sitting. At this point the company are starting to sound like an elderly relative who every time you meet up with them insist on regaling you about the time they were in the war. It was interesting the first time. Amazing even. But by the hundredth time you just smile and nod politely and count the hours until the visit is over.

What is most galling about the WWE’s obsession with this particular time period is the continuing cognitive dissonance of the company acknowledging that this was the most profitable and exciting time in their entire history, and acknowledging that the reason for this was the patented WWE “Attitude” of the time (adult-orientated programming which pushed all boundaries of taste and decency in the name of entertainment), and yet continuing to produce PG programming in the here and now which comes nowhere near the success of this golden era. It is one thing to come out and remind us that war is hell, and sometimes we do things we are not proud of en route to victory, but it is quite another to brag about how great your strategy was for winning the war, then completely ignore it when it is needed once again.

Episode after episode of Monday Night Wars remind us that during the Attitude Era nearly ten million Americans were regularly watching wrestling on a Monday night. Now it is considered a success for Raw to get more than three million. If you want to know where the seven million ex-fans have gone, the answer is MMA — an adult-oriented physical sport which pits athletes into fights against one another for titles and often over personal issues (sound familiar?) Products such as this never-ending glut of Attitude Era DVD sets designed to appeal to those former fans demonstrate WWE’s understanding of this market, and their dogged refusal to get it back because profits for shareholders now come from lucrative sponsorship deals rather than television ratings, and ultimately the business of WWE has more of a legal responsibility to its shareholders than it does to its fans.

Ranting aside — if you do want to, yet again, relive those amazing times, then Shots Fired really is the definitive telling of the story, and an essential DVD for any fan of the era. Receiving my review copy with all the baggage of the previous few paragraphs willing me to hate every second of it, even I could not fast forward through any of the four discs worth of episodes. I found myself glued to the screen and utterly engrossed in the story of this shining moment in wrestling history that it is highly unlikely we will ever see again. Dan McKee