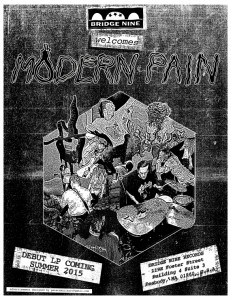 Modern Pain was formed in 2010 in Dallas, TX by four people with music taste on opposite ends of the spectrum for the sole purpose of playing straight edge music with no gimmicks: no bleached hair, no pseudo-positive lyrics. While their individual music tastes might not be similar, the few bands they mutually love have an apparent influence on their music, from classics like Integrity and Infest to more recent bands like Think I Care. With a handful of tours, a demo and an EP under their belt, and a new full-length slated for 2015, Modern Pain has no plans of slowing down. On March 7th, Modern Pain will hit the studio with Arthur Rizk (Power Trip, War Hungry, Inquisition) to record their yet-to-be-titled debut full-length that Bridge Nine will release later this summer. For now, listen to Modern Pain‘s Self Deconstruction EP (2014, Six Feet Under Records) here and check out the band online here.
More news and information coming soon.