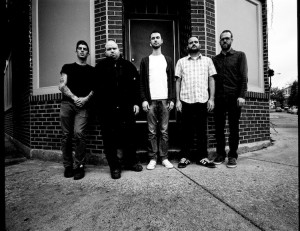 Originally released in early 2005, Modern Life Is War‘s second full-length album, Witness, was not only musical progression for the band, but artistic perfection. Hailed as “quite possibly the greatest hardcore album of our generation” (Sputnik Music), the album followed Modern Life Is War‘s 2003 debut My Love. My Way. and is their true story of real life struggle in contemporary rural America. Witness is also their artistic journey into the soul of personal rebellion, an introspective gaze into the bitter exile of their own lost generation. The album features some of Modern Life Is War‘s most recognized tracks: “The Outsiders (AKA Hell is for Heroes Part I)” and “D.E.A.D.R.A.M.O.N.E.S”, screaming the words that many wish they could say, in the name of the pain, beauty and the hardship of living. Lyrically captivating, musically discordant and soulfully haunting, both the crowning achievement and well-worn scar we all long to artistically create.

Now, ten years later, this landmark album has gotten a complete revamping as well as a spectacular remastering by Brad Boatright at Audiosiege. Packaging for both CD and vinyl formats of Witness has also been drastically improved; for the first time ever, the vinyl version is presented in a deluxe gatefold jacket with a 12-by-12-inch 28-page booklet. While the CD version comes in new eco-friendly packaging, both formats also include additional liner notes from listeners worldwide. Look for pre-orders to come soon from Deathwish before the album’s June 2nd street date.

Following Modern Life Is War‘s UK and European tour, which starts next week, the band will return to the states to play a handful of Witness 10-year anniversary shows where they’ll perform the album in its entirety. Tickets for these shows will be on sale on Friday, April 3rd – stay tuned to Modern Life Is War‘s Facebook page for more information. 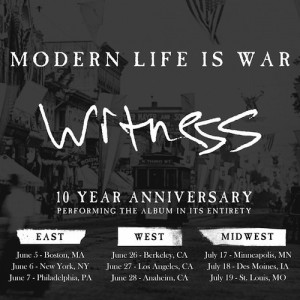