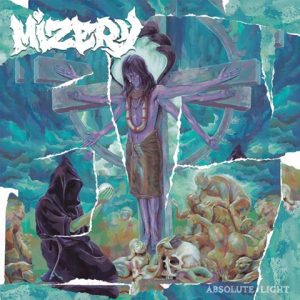 Judging this book by its cover would be a bad decision indeed, as you could be easily forgiven for thinking this was one of those forgettable third albums that one of the thrash metal pioneers unleashed in the early ’90s. Mizery are in fact a contemporary band that combine metal and hardcore to create something of a lethal cocktail, with a definite Big Apple flavour. Whilst it may not be the same style, the time-frame mentioned before isn’t far short of the mark as Mizery capture elements of the likes of Cro Mags, Leeway, V.O.D. and Crown Of Thornz, bringing this all together with style. Monstrous riffs collide with streetwise vocals and pounding rhythms, in much the same way that Iron Age managed to capture so perfectly some ten years ago on their debut album. The whole record is in fact a huge bag of riffs, splicing together metal sounds with a streetwise edge that keeps things rolling hardcore style. OK after all of that, instead of haunting the streets of the Lower East Side, it turns out these cats hail from sunny San Diego, and with that in mind you can hear the West Coast influences of anyone from Suicidal Tendencies to Death Angel creeping into the mix. Although this review is chock full of name-dropping, Mizery can and should be rated on their own merits as they have put together a pretty spectacular debut album. Tom Chapman