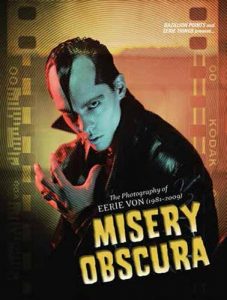 What a treat this is. A candid look at the career of Misfits/Samhain/Danzig multi instrumentalist Eerie Von, as seen through his very own lens. Not just a cool logo on a Top shop T-Shirt, The Misfits are widely considered one of the most one of the most influential punk bands ever. Using classic horror movie imagery coupled with ferocious punk rock, they are the grandfathers of the horror punk scene and Eerie was on hand to capture it all. Originally he was just the bands personal photographer and although he never officially joined the band, his bass and drum work can be heard on several classic tracks. In the mid 80’s Glen Danzig asked Eerie to join his new band Samhain, but by 1987 this band had transformed into Danzig and went on to arena rock glory, touring with the likes of Metallica and Marilyn Manson.

Like any good photographer Eerie kept a camera on him at all times and he has really captured some genuine punk/metal history in this book. He took The Misfits first ever promo shots , in a cave in New Jersey, he captured the first time Jerry Only and Doyle rocked the “Devil Lock”  and all photos are accompanied by some great rock n’roll stories and anecdotes which make for very entertaining reading and gives you a personal backstage pass to each band. You also get to see the lighter side of the notoriously private Glen Danzig, which is always fun.

The book is beautifully produced by Bazillion Points. It’s a glossy behemoth with some double page spreads which gives it a coffee table book vibe and in his photos Eerie captured the bands at the height of their respective careers, providing a vital, individual, and at times very personal, insight into the history of punk and metal. A must have for fans of any these bands……Chris Andrews