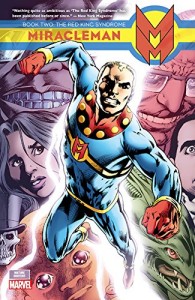 Miracleman: Book Two: The Red King Syndrome – The Original Writer, Cat Yronwode, Alan Davis, John Ridgway, Chuck Austen, Rick Veitch & Rick Bryant (Marvel / Panini)
There are very few books in the four colour universe that carry the same kind of legendary weight as Miracleman. With the books finally being re-released after years of legal delays and all other sorts of issues, I’m finally in a position to categorically confirm that its reputation is well earned. Everything you’ve heard various luminaries say about the series is true. It really is one of the unsung towering greats of comics, and ‘The Red King Syndrome’ further enhances the mind-boggling scale of its mythology and story-telling. It looks incredible too; each and every panel almost leaping out of the page with colours and images so vivid and imaginative that they’re almost real enough to touch.

Beginning soon after the first book, ‘A Dream of Flying’ ended, with Michael “Miracleman” Moran’s wife pregnant; although whether the child is his or his alter-ego’s is at this point, anyone’s guess, a fact that has created a sense of unease in the relationship. But before the writer can explore their evolving marriage any further, the plot kicks into over-drive, in a frantic and cerebrally challenging and intelligent tale, the truth of Miracleman’s creation, his origins and his creators history is laid bare, and in a life and death struggle between ‘father’ and ‘son’, he finally comes to terms with, and begins to understand who he really is and what he’s really capable of, and of becoming. All of which runs parallel to, the slowly developing story of his child and its arrival, how his own ‘birth’ could spell the end of everything and everyone that he holds dear, as the “people” his gifts came from seek to track him, and others like him (yes, there are others, intriguing isn’t it?), down and I haven’t even begun to talk about the fiendishly wonderful, and gradually unfolding story of the return of his former colleague, no nemesis, Kid Miracleman. I know, right? It’s a lot to take in, but believe me, there isn’t a single wasted panel, with each sentence and every line of artwork being pivotal to, or playing a part in Miracleman’s ever changing legend.

Challenging the notion of evolution, and the nature of discovery, in that selfish desire will always overcome and outweigh altruism and that in human society the needs of the one always outweigh the many, while musing the reality of the relationship that exists between father and son and the way it’s viewed from each (slightly twisted) perspective, ‘The Red King Syndrome’ abandons the formulaic and sets off on a journey to find it’s true identity. And that’s just the tip of the iceberg boys and girls, dig a little deeper and dive beneath the surface and you’ll stumble across all manner of sub-plots and ideas that you might previously have missed. I know, because I’m still digging and making all kinds of new and exciting discoveries. It’s the violent, barbaric, brutal, cold and cruel, yet at the same time touching, gentle and warm story of a strange hero finding his way in an even stranger world, and it just gets better and better every time you read it. It’s a miracle… Tim Mass Movement