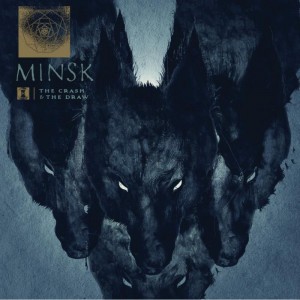 Minsk – The Crash and the Draw CD (Relapse)
I first came across Minsk on a Hawkwind covers album released by Neurot Records several years ago and was mightily impressed by them, so I was looking forward to hearing this 11 track full length album from the Illinois five piece; a mere 6 years in the making. In keeping with the bands sludgy psychedelic doom, the songs build up from gentle meandering opening segments to thick slabs of synth tinged experimental post-metal – think Neurosis and you’re in the right territory. I have to be honest by the fifth track ‘Onward Procession III. The Blue Hour’ (part of a five piece concept) my attention was starting to wander and didn’t really return. It’s just a bit too drawn out and spacey for me (at least where my musical taste is at this particular moment). Ian Pickens