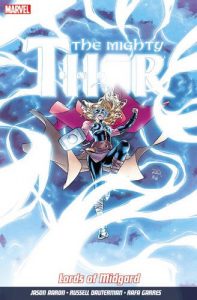 Subjugation, slavery and the singular wills of would-be tyrants are just some of the injustices the Mjolnir wielding Jane Foster overcomes in Jason Aaron’s tour de force Lords of Midgard. Wait, you didn’t think she was actually going to be beaten did you? Come on, this isn’t some dystopian Alan Moore style nightmare vision of Ragnarok. The Mighty Thor, with the all-powerful Aaron at the helm, is about overcoming and fighting against near impossible odds regardless of personal cost or suffering. This is the quintessential stuff of superhero stories, refined, distilled and served up in the form of a Norse “god” (or more accurately, the spirit of one inhabiting a compliant host) who is willing to sacrifice everything in the pursuit of doing what’s right. And you know what? At the risk of introducing a unpopular theory into fandom, Jason Aaron’s current run on The Mighty Thor is easily one of the best Asgardian epics published by Marvel and is, in my humble opinion, second only to J. Michael Straczynski’s tenure as the scribe of Thor’s mythology. All of the elements work in near perfect synchronicity. Jane Foster as Thor, her arch nemesis, all-round bastard, CEO of Roxxon and near conqueror of the Nine Realms, Dario Agger, the myriad of sub-plots that wiggle in and through the overall arc, the lavishly intricate characterisation and dialogue, the fevered attention to plot detail, it all functions like clockwork. And then there’s the superlative art of Dauterman, Garres and Irving, each offering a different and individual interpretation of Thor’s world that gives the book its own sense of identity and helps propel it into the stratosphere.

As stories go, Lords of Midgard is guaranteed a seat in the Halls of Valhalla. Whether it’s the tales that Loki tells, and the power he delivers, to Roxxon in order to make them unstoppable, the vicious and delicious corporate war that ensnares all in its thrall, threatening to wipe out the acceptable face of popular East Coast consumerism unless Thor can find a way to bring it to a halt, the S.H.I.E.L.D. agents determined to bring in Jane Foster and proves who she really is to the rest of the world or the touching realisation that Thor comes to about the true nature of her Hammer and the fantastic, never before told of its “legitimate” origin, it’s all here in Lords of Midgard, a tome that’s practically exploding with action and adventure. Jason Aaron is a master of subtext, both subtle and screamingly obvious, and the ideas of being controlled by, and fighting against, unseen forces that he incorporates into the story, typified by Jane’s cancer and the secret Corporate Cabal that determines how the world is run, are themes that in these turbulent times, everyone can immediately relate to and understand. One day all comics will be this good, but until that day arrives, this’ll do just fine…  Tim Cundle