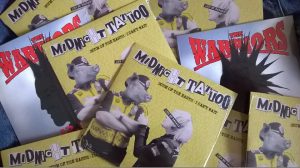 As the banner ad for this release says, this EP brings together the new breed and the old masters of oi! Kicking off with the “new boys” – that’s not quite true as Belgium’s Midnight Tattoo have been on the go since 2010 but this is the first time I’ve heard them. They offer up two tracks of uptempo antifascist streetpunk. The sound is quite rough and ready but with an ear for a catchy tune – think very early Dropkick Murphys meets The Agitators and both of their tunes bounce along at a decent tempo. Lots of backing vocals give these tunes power and aggression. Flip the disc over we have the elder statesmen of Herne Bay The Warriors contributing two pounding tunes. Graham Saxby and his mob have been banging out tunes for not just years but decades now, and they show no signs of slowing down. They have always have a rock influence on the sound but more recent records have had a harder edge to them, and these songs are delivered with an urgency that keeps you on your toes. Old, new, borrowed or blue, both sets of troublemakers deliver the goods in timeless fashion and fans of the genre need to get online quick to snap up this limited edition release. Tom Chapman