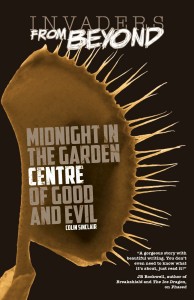 As soon as I read the blurb on this book I loved the premise, what’s not to like about a Garden Centre caught up in the middle of an Alien invasion? We start off by meeting Miller, kicked out of home after crashing his dad’s car into a lake whilst drunk and dumped by his fiancé and forced to take a job at ‘Brackett’s’ a run down, out of town Garden Centre. ‘Brackett’s is an odd place, I get that now’ is a quote from early in the book and dangles a hint to the reader that we’re going to see something weirder after we meet the strange collection of staff and the various ways they try to make the humdrum days slip by more easily.

The opening of a sparkling new competitor just across the road, ‘Garden World’ sends everyone’s tranquil life into a tailspin; left fearing for the jobs and wondering what kind of threat this new store will be. The staff quickly organize themselves to recon the new store and our hero ends up discovering way, way more than he thought…

This is a fun book; it’s the written equivalent of watching a Simon Pegg movie. It doesn’t take itself too seriously but at the same time the characters are well developed and well written. You get sucked into their lives and you care about them once it all starts to get a bit bizarre. Lots of twists, lots of humor; achieves that rare feat of being funny and dark at the same time. Once you get sucked in its hard to put down and the second half of the book races by and you’re left wishing it was a bit longer than a novella.  Simon Down