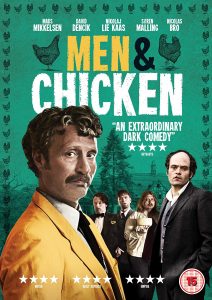 Even at first glance, it should be quite clear that Men and Chicken is going to be an odd film. A really odd film. Not even just because it’s Danish, but you have to wonder if that possibly adds to it, although I can’t deny that my knowledge of the country extends much further than their excellent bacon.

Gabriel (David Dencik) and Elias (Mads Mikkelsen) are introduced to the fact that their family tree is larger than originally thought, following the death of their presumed father who leaves a cryptic half message on videotape. Travelling to the island of Ork, they’re introduced to their comically violent siblings, and a mystery of their own lineage that’s itching to be uncovered.

The interaction between the brothers has a wonderful, slapstick nature to it that reminds me of Rik Mayall and Adrian Edmondson in Bottom, with each brother having their own particular favourite weapon they like to grab – from large iron pots to taxidermy animals. Which seem to be easy enough to find when required, luckily for Franz.

Almost unrecognisable from his lead role in Hannibal, or as the villain in Casino Royale, Mads Mikkelsen is undoubtedly the star of the show as the bull headed Elias. Despite the opening scenes bringing an instant dislike to both brothers, it’s a testament to their portrayals that by the end you somehow have an attachment to the both of them, in all their strange glory.

Men and Chicken is a black comedy that would have fit perfectly in the weird, late night lineup of Channel 4 in the late nineties. It’s an unusual tale that plays on the viewers predisposed notion of how small island populations behave and mixes it up with a tale that somehow manages to end up being quite heartfelt. At the very least, I’m now open to the other work of director Anders Thomas Jensen, and for that I have to thank Drafthouse Films. James Connors