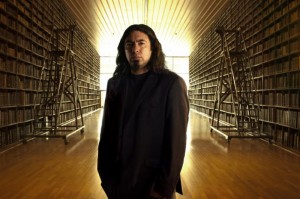 Orchestral/operatic metal collective, MELTED SPACE, is proud to announce a newly-signed worldwide deal with Sensory Records for the late Summer release of the outfit’s sophomore full-length opus, The Great Lie.

MELTED SPACE is the creation of French composer Pierre le Pape, who bears a master degree in classical music and movie scores, here creating a modern opera that takes over the classical codes, including numerous characters, scenario, powerful orchestral arrangements and varied ambiances, all set to skilled and catchy songwriting and amazing casting. The new MELTED SPACE album, The Great Lie, will feature fourteen prestigious and unexpected singers, joined by seven talented guest musicians and The City of Prague Philarmonic Orchestra. Together, this cast will create an epic saga as powerful as moving. By mixing the tradition of the classic opera with infectious heavy metal, The Great Lie promises to set a new milestone in the genre.

Initiated by pianist and composer Pierre Le Pape, from the city of Troyes, MELTED SPACE stands as the first French metal opera boasting the air of a huge choral fresco, bringing together numerous female and male singers and musicians from the international metal scene. Powerful metal meets the refined essence of movie soundtrack-style movements, and through the embracing of various influences, citing Within Temptation and Dimmu Borgir, the band has seduced a wide audience. MELTED SPACE‘s music is inspired by traditional symphonic metal but is also rooted in the black and death metal scenes, each coming to play depending on what action that is taking place within the story that Pierre is telling us.

Created in 2007, MELTED SPACE began as an instrumental project from Le Pape. Under the thumb of his electro-acoustic teacher, Pierre created a universe of its own which can be described as a potential ultimate step in Dante’s “Divine Comedy.” The first record, 2009’s There’s A Place, was totally self-produced and while it was a completely instrumental album, it laid the foundations of the band’s 2012-releaseed successor, From The Past, which really pushed the name further. Gathering twenty-six musicians, renowned female and male singers, From The Past received rapturous articles and one of the most enthusiastic welcomes. Following this success, Pierre didn’t stop there and started to compose a mini-album entitled Between, which was released in May 2013 with Season Of Mist and PlasticHead handling French and European distribution. MELTED SPACE had gone further again as Pierre hired two internationally-known singers to interpret his songs: Liv Kristine (Leaves’s Eyes, ex-Theater Of Tragedy) and Ashmedi (Melechesh). Once again, the unanimous feedback from the media helped elevate MELTED SPACE to one of the biggest names of the genre.

After these records helped create an international aura for the band, it was time to give their music a live sound. Pierre hired five talented musicians to go on tour with him as main support act for The Old Dead Tree’s last tour in October 2013. This tour was a success, establishing MELTED SPACE as a promising band, not only a studio project. This great motivation continues for Pierre and his team as 2014 brought them to new festivals and tour dates, and now, a brand new album, which will welcome some of the most famous names of the international metal scene, is set for release this September.

Stand by for the amazing cast of guest musicians and vocalists who have taken part in the construction of MELTED SPACE‘s The Great Lie, as well as the album’s official street date, audio samples and more preceding its September worldwide release via progressive metal label, Sensory Records, a division of The Laser’s Edge.