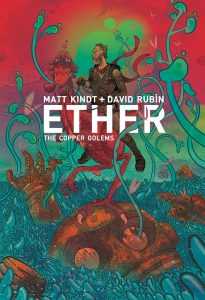 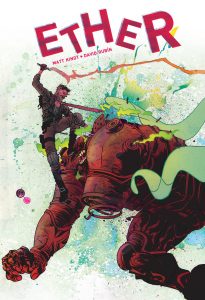 Ether: The Copper Golems finds Boone Dias, our science-minded adventurer, trying to seal the portal breaches that have opened between Earth and the Ether that have unleashed devastating magical fury on Earth. In order to put an end to this chaos, Boone recruits a powerful team of mystical beings including a grumpy, spell-writing fairy; a bickering, lavender gorilla; and a bull-headed, motorcycling spell-hacker. These heroes set off on a journey taking the reader through the centers of volcanoes, deserts full of living mummies and sphinxes, and a bizarre fairy forest in an effort to save both worlds from complete destruction!

The first issue of Ether: The Copper Golems goes on sale May 16, 2018, and is available for preorder at your local comic shop.