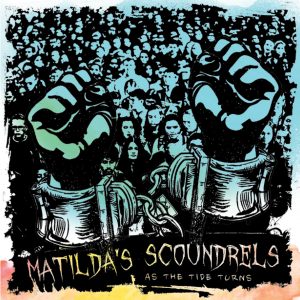 I’ll be the first to admit that I’m partial to a bit of folk music, especially when it’s combined with punk rock. All too often though, when the folk-punk thing happens, it sounds a little too cheery and happy and loses some of its get up and go in the mix. The  anger, passion and energy that it needs in order to thrive gets a little blurred between the lines that separate the two genres and sometimes it loses it’s much needed, and necessary, punch. However, Matilda’s Scoundrels appear to be one of the exceptions to the rule and have found a way of harnessing punk rock’s best weapons and have bound, and stuffed, them into a folk shaped package in As the Tide Turns. It’s belligerent, fierce, catchy as hell, and jammed full of the kind of sing-a-longs that were made for late lock in’s in tiny Cornish coastal pubs that stand firm against the fury and onslaught of Mother Nature while the ale and cider flows, unswayed and unchanged by the events that shape the outside world. Stand tall, stand firm and stand hard me boys, the tide is turning…  Tim Cundle