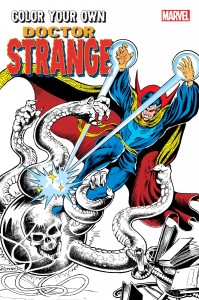 ou’ve read the comics. You’ve experienced these iconic and groundbreaking stories. Now it’s time to experience the Marvel Universe like you never have before – as a coloring book! Marvel is pleased to announce its next wave of Adult Coloring Books featuring some of Marvel’s most iconic characters, stories and artwork to delight fans the world over! The Marvel Universe has action, power, excitement and adventure. Now all it needs is YOU!

“The Adult Coloring Book market has become a pop-culture phenomenon,” says David Gabriel, SVP Sales and Marketing, Marvel. “With Marvel’s first wave of Adult Coloring books, fans added their own personal style to classic Marvel stories. And now, with our latest editions coming this year, fans will be able to bring their personal artistic style to some of Marvel’s most recent and epic events.” 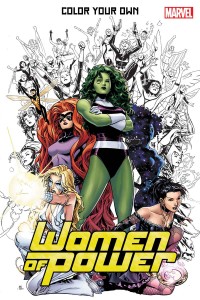 First, the women of Marvel have won the world over with some of the most influential and mightiest heroes to hit the comic book industry in years. Now is your chance to accentuate the strength and power of these women with COLOR YOUR OWN WOMEN OF POWER. Showcasing images of the might and majesty of Marvel’s leading heroines, these images feature artwork from Marvel’s female led titles, variant covers and more!

Then, Marvel’s magical maestro, Doctor Strange, casts a spell and comes to life in COLOR YOUR OWN DOCTOR STRANGE featuring a tome of classic and contemporary depictions of the master of the mystic arts as he traverses the visually awe-inspiring world of the enchanted. This is one you won’t want to miss! 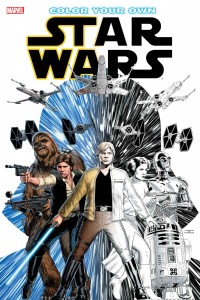 Finally, it’s time to take your coloring talents to a galaxy far, far away with COLOR YOUR OWN STAR WARS!  Travel to the stars and bring your own choice of hues and shades to the further adventures of Luke, Leia, Han, Chewie, Darth Vader, and a whole new cast of characters presented from Marvel Comics. Will you choice the light or dark side?

So dig out those crayons, markers and colored pencils and prepare to return the color to the Marvel Universe, True Believer. But don’t forget your imagination – you’re going to need it! Channel your creative energies, unwind after a hard day’s work, or just relive your childhood memories! Look for the COLOR YOUR OWN WOMEN OF POWER book in September with COLOR YOUR OWN DOCTOR STRANGE and COLOR YOUR OWN STAR WARS to follow later in 2016!

COLOR YOUR OWN DOCTOR STRANGE

COLOR YOUR OWN STAR WARS