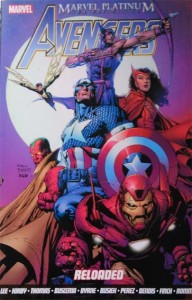 Marvel Platinum: The Avengers Reloaded – Roy Thomas, Stan Lee, Steve Englehart, Kurt Busiek, John Byrne, Brian Michael Bendis, John Buscema, Jack Kirby, George Perez, Don Heck, John Romita Jnr. & David Finch (Marvel / Panini)
It was inevitable, given that the release of the second Avengers film, ‘The Age of Ultron’ is just around the corner (metaphorically, not literally), that there’d be some sort of ‘best of’ the Avengers that focussed on their battles with their A.I nemesis unleashed upon the world in order to coincide the appearance of the box office record shattering (look, you know as well as I do that the film is going to smash every record and convert a legion of nay-sayers to true believers) cinematic adventure. There’s two ways you can look at this book. If you’re a “glass-is-half-empty” grizzle-puss who see’s everything that happens in the world through a thinly veiled haze of jaded cynicism, who stopped believing in magic and the power of the imagination a long time ago, then you’re going to start moaning about re-releases and “newbies”, and that’s fair enough; but if you do fall into this camp, then I’d humbly suggest that you stop reading and walk away, because this book just isn’t for you. If however, your glass is half full, and you still believe that, despite everything, the world is full of wonder, and that the fantastical is just beyond your reach, yet you’ll stretch a little further toward it every single day, just because it’s there, then folks, this is most definitely a tome that belongs on your ‘must-read’ shelf. And let’s face it, when the Avengers are involved, who doesn’t believe in parallel universes, strange dimensions, gods, monsters, mutants and creatures from the beyond the stars? I mean, if the Avengers can transform a grumpy old punk rocker like me into gibbering fan-boy wreck, they can do it to anyone can’t they? In case you’re wondering, the last couple of questions were rhetorical and the answer to both is an emphatic “yes”.

Onwards and upwards, it’s time to talk about the book. As I’ve already mentioned, most of the stories compiled in ‘Avengers Reloaded’ are slanted toward Ultron, which is never a bad thing, because as villains go, he’s a most worthy adversary; and his evolution throughout the pages, and the ways in which he tests the resolve of both the Avengers and Earth is never less than entertaining and always hugely enjoyable. Where Ultron goes, Vision follows, and the synthezoid super-hero’s life as a member of the Avengers, from his initial acceptance as part of the team, his quest to become more human, his burgeoning romance, marriage and eventual separation from the Scarlet Witch are all covered and featured in fantastic detail, as his untimely “demise” during the Avengers darkest hours when the team was targeted for destruction by an enemy unknown. Or more accurately, only remains unknown if your only taste of Marvel’s premier team’s adventures is this book, which I’m sure it won’t be, and as soon as you start delving further into the teams history, you’ll discover everything you needed and wanted to know and so much more besides. Then there’s the tales of ancient alien life and the way its moulded human evolution and the Avengers battle to prevent it from doing any future harm, the changing face of the team and its eventual regrouping and so much more besides. In fact, I’m getting breathless just thinking about the sheer volume of history, adventure and action featured in ‘Avengers Reloaded’. Phew, I think I need to sit down for a minute and gather me wits. There, that’s better…

As you’d expect, the quality of the artwork varies incredibly from the gung-ho four colour genius of Jack Kirby, to the intricate beauty of George Perez’s brain frying offerings before dazzling your senses with the vastly different, but always enthralling pencils of John Romita Jnr and David Finch, but the story-telling, that’s always spot on, and so even if some of the images aren’t exactly to your taste, you’ll always be able to lose yourself in the character led, adrenaline fuelled excitement that is the Avengers world. As snappy, drop you into the middle of the boisterous insanity introductions go, they don’t get much better than ‘Avengers Reloaded’. As Stan the Man is so fond of saying…Excelsior! Tim Mass Movement