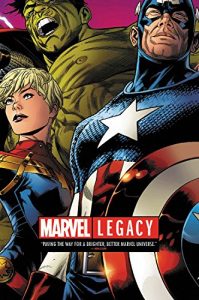 As uncomfortable and bittersweet as it can sometimes be, change is a necessary constant of existence. Without it, every facet of life would stagnate, decay, wither and eventually fade into memory and nothingness. Marvel Legacy is all about change. It’s the nexus point that ushers in a new age for the House of Ideas. Set in the aftermath of Secret Empire, at a time when everything and everyone in the Marvel Universe is in a state of flux, Legacy resets the compass that guides the hearts of the heroes and sets them on a new course; which if the first issue of Legacy, included in this tome, is anything to go by is going to take each and every costumed crusader and villain into uncharted, intriguing and no doubt, nerve shredding territory.

Beginning at the dawn of time, it opens with gods and ageless avatars and incarnations of some of the most recognisable faces in the pantheon of heroes battling an ancient being, and even though they seem to fight to a hard won victory, their triumph is, at best, fleeting. Legacy, then flashes forward to the present, and in a story involving multiple strands, begins to loosely tie together the fates of Loki, Deadpool, the Avengers, Ghost Rider, the Guardians of the Galaxy, Iron Fist, Doctor Strange and a team thought lost forever in the depths of the Universe.  It also sees the return of one of superherodom’s favourite mutant sons and teases fandom with the possible return of another fallen hero, because as we all know far too well, death is never the end in the four colour universe. And while of this is happening in Steve McNiven and Esad Ribic’s gorgeously illustrated pages, Jason Aaron explores the mind-set of each of the players as they consider their places in, and how they’ll be remembered by, the world.  It’s a full throttle start to what promises to be one of the highlights of the comic book year.

Legacy also serves as a perfect starting off point and introduction to the Marvel Universe for newbies, as the inclusion of Marvel Primer Pages charts the origins of the characters who are doubtless going to be at the forefront of the everything leading into, and post, Legacy and also provides brief snapshots of their personal, and professional, histories. That said, it’s common knowledge for us old timers, but it’s still entertaining enough to lose yourself in over a cup of Joe or two.  While the aforementioned histories and initial chapter of Legacy would normally provide more than enough bang for your buck, this book goes the extra value mile and also includes a staggeringly gorgeous cover gallery and takes a peek behind the creative curtain and goes behind the scenes in a number of interesting and involving interviews with, and features about, some of Marvel’s A-list writers and artists. Everything is about to change. And this is where it all begins. Welcome to Marvel 101… Tim Cundle

*All of the big guns. And when I say all of them, I mean ALL of them.