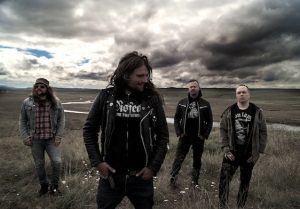 Of the “Harmagedon” video, Martyrdöd collectively proclaim, “This song pays homage to all people that keep on fighting against all odds. Against supreme annihilating oppression. It’s a song of these current times“.  Adds the video’s director Jimmy Johansson, “This is how I imagined what a Martyrdöd video would look like. Intense, chaotic, in your face but, yet beautiful and clear.”

Martyrdöd are central figures in the modern era of the international crust community – in no small part due to their members’ links to other exemplary bands such as Skitsystem and Agrimonia – and over the years, their powerful allure has resonated with listeners across the spectrum of heavy, enamored by their bleak outlook and scorching melodies. For fifteen years, the members of Martyrdöd have honed their craft to a level of mastery, and it shows – List is quite possibly the most refined record to slip in to their furious, spiky discography, and it doesn’t let up for a moment. The combination of crisp Scandinavian metal distortion and intricate, folk-like guitar leads contribute to a record that feels like one for the ages — very much like the fearsome, In Extremis. List is an artistic highpoint!

On November 25th, Southern Lord will release Martyrdöd’s List worldwide on CD and digital as well as on LP in North America only. In Europe, the LP is being handled via La Familia, and D-Takt and Råpunk. Preorders are now live at the Southern Lord website.

Martyrdöd are confirming live shows for 2017, including a set at the upcoming Netherlands Death Fest and Close-Up Båten cruise in March, with more widespread tour dates to be revealed in the weeks ahead.