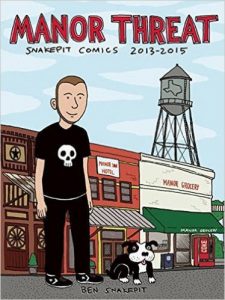 After a few niche releases, Microcosm gets back in the game with the latest instalment of Ben Snakepit’s daily diary comics.

Charting three years in Snakepit’s life in which he turns 40, moves house and changes jobs twice, each day is represented by 3 panel strip drawings, which it must be said are not exactly on a par with Caravaggio, but nevertheless possesses a charm and punk aesthetic of their own.

Each panel is accompanied by one of Snakepit’s favourite songs/bands, some of which bear relevance to the days’ events (particularly M.O.T.O’s “I Hate My Fucking Job”) while others are completely random, but which provide a glimpse into Ben’s life.

It’s honest, to the point of mundaneness; in detailing each day – which let’s be honest are fairly routine for most of us, Ben documents three years that many of us can empathise with, and it’s this repetition that makes the book so familiar and reassuring; in fact I’ll bet most 40 something punks can identify with Ben’s newfound fondness for Craft Beer (or ‘Fancy’ Beer as he insists on calling it), battles against middle age spread and where DIY increasingly refers to patching up your home than putting on Punk shows. An enjoyable comic strip for us middle age punx. Ian Pickens