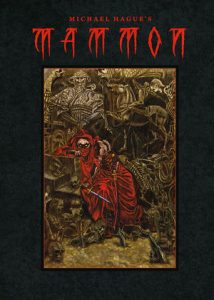 A fresh take on the story of Dracula’s Jonathan Harker, Mammon, Michael Hague’s latest sees one Jonathan Meeks being dragged across from 1920s New York to meet his fate in the shape of omnipotent son of Satan – Mammon.

After going to the theatre to see Dracula and pondering the notion of eternal life, Jonathan conveniently receives a mysterious invitation in the post, complete with Dragon wax seal and the sort of ancient calligraphy you know means trouble. The letter claims to be able to reveal to him the ancient secrets currently piquing his curiosity, as well as offering him passage to ancient castle where his mysterious benefactor will explain all.

Once he’s crossed through London, Paris, Vienna, Budapest, and Brasov, the train running alongside the story of Bram Stoker’s original Harker splits from the track, and we’re given something totally new and original. Upon arriving, it’s revealed that Mammon is not in fact a vampire, but a prince made immortal after a midnight visitation from Little Horn himself. The Devil takes his mortality, transforms his sister into the first ever vampire, and his two childhood friends into demons and shapeshifters. The foursome have roamed for centuries, rewriting history, collecting followers, and ultimately getting so bored, they decide to anoint a Priest into their bloodsucking ranks and convert to Christianity. Mammon’s ultimate goal in bringing Jonathan to his Carpathian hideaway is to end the reign of Satan and go on cleansing the human race of evil, in the name of Jesus Christ.

Whilst the story itself is at times a little confused, with potential-filled characters we never really get to the full underbelly of, there is no denying that the art of the book is something really special.

Hague’s trademark delicate and intricate style brings gorgeous depth to fantastical scenes of rich historical landscape, highlighting the darker side of cityscape and nature alike. Full on Dante-esque scenes adorn the castle doors, and the creatures of the night receive the sort of impossible attention to detail that tempts you to touch the page, fully expecting to feel scales and bark at your fingertips.

An interesting attempt at an alternative Stoker narrative, and a choice edition to the bookshelves of any fairy-tale, horror, or fantasy fan for the art alone. Sophie Francois