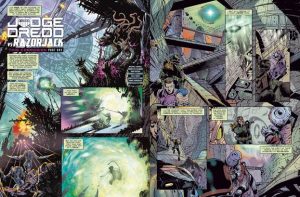 The mind behind the colour of Watchmen and Batman: The Killing Joke brings a new, macabre horror to the streets of Mega-City One this week!

Part Hellraiser and part Predator, Razorjack is a demonic, other-dimensional puppet mistress created by Higgins for a self-published title in 1999.

Written by Carroll with art by Higgins, colour by Sally Hurst and letters by Annie Parkhouse, This Corrosion is a twisted, macabre sci-fi horror story that pits Dredd’s duty to protect Mega-City One and uphold the law against Razorjack’s mission to wipe out everything she encounters – with explosive results! 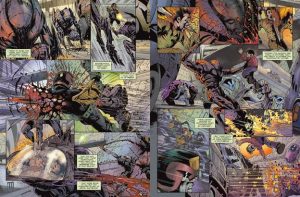 Judge Dredd Megazine #396 is available from 16th May from all good newsagents and comic book stores, as well as digitally from 2000 AD’s webshop and apps for Apple, Android, and Windows 10 devices.

John Higgins said: “The Razorjack/Judge Dredd crossover is my dream job, the culmination of many talks over a very long time with writer Michael Carroll, at conventions and bars all over the world. Finally to have my own character appear in the universe of my favourite character of all time seems like all the successful deadlines I ever hit and all the best commissions I have ever received – rolled into one just bliss!

“To work with Michael has been a collaboration made in the depths of the deepest inferno, his mind twists left, mine twists right, we both enjoy SF horror, I think we touch on all the tropes that influenced us as fans and created what is for me the best introduction so far to the hell of Razorjack’s world. Michael has written a story with the scope of a Mobius infinity canvas, with editor Matt Smiths’ support he has created the space for me to present my twisted baby, Razorjack, in all her gory. Maybe it will exorcise this demon from my mind and finally allow me a peaceful night’s sleep … or maybe the nightmares will start all over again!”

Michael Carroll said: “Judge Dredd versus Razorjack has been a dream project for a long time. I think John and I began talking about it even before I’d started working in comics, so seeing it come to fruition is incredibly satisfying. I’ve known John for the best part of two decades now: I reckon I’ve got a good handle on what he likes to draw — plus he’s not shy about *telling* me, which saves time! With the script for This Corrosion I tried to go for a sort of mid-‘80s Metal Hurlant approach; dark, visceral, intense and relentless, and John and Sally are clearly more than equal to the task: they’ve produced some of the best comic-book art I have ever seen. It’s striking, beautifully nightmarish, unforgettable, and in some cases just plain nasty — just the way we like it!”