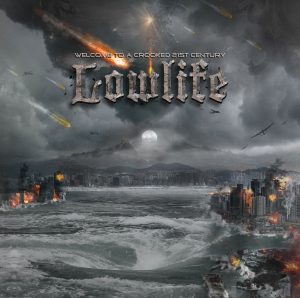 Anyone already familiar with the Austrian hardcore scene will already be aware of its old school hardcore specialists Spider Crew, but in 2013 guitarist Jimmy stepped up to the mic, for a more brutal assault on the hardcore world in Lowlife. With two releases to their name already, Welcome To A Crooked 21st Century is their first full length album-and what an album.

They’ve taken that Terror sound and added a bit of Rucktion Records influence to come up with a truly vicious debut. Taking their fury out on racism, prejudice and political abuse- again thank you Donald for provoking more good angry music, to a background of heavy riffs and double bass drums that break down into beautiful head nodding grooves, this is a band to be reckoned with in the future. In the live arena I can imagine tracks like Lone Wolf and This Is Our War will surely help fill some Emergency Rooms across Europe this summer, while Against The Wall will have entire venues chanting the lyrics back at them.

Part of the VSHC (the DMS of Vienna if you will) and with an already impressive array of support slots with the likes of Madball, Nails and Death Before Dishonour, you’ve really got to catch these boys if you get the opportunity… Chris Andrews