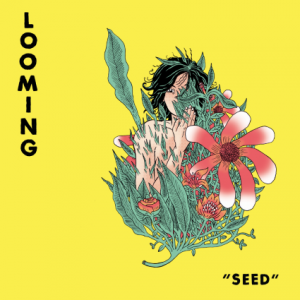 Right from the intro, Seed, the second album soon to be released by Looming, pulls you in and makes you take notice. Intricate guitar riffs blend beautifully behind lead vocalist Jessica Knight’s haunting voice, bringing to mind an early 90s, riot grrl grunge band while still feeling fresh and new. The well written lyrics explore love, loss, and self-discovery, from tracks like Queen, with its dreamy sound and melodic harmonies; to Input, with a grungy, guitar heavy tone.

To me, there were two big standout tracks on this record. The song from which the album takes its name, Seed provides a real look at the talent and cohesion of this band. The chunky guitar riffs blend wonderfully with the dual vocal harmonies, hitting you with a wall of sound that rises above the first half of the record.

After a few more middling offerings, I made it to my favorite by far, Waves. This song almost feels like it belongs on another album…it’s got a poppy, synth sounding beat and a groove that grabs your attention from the first few notes. I would be happy to put this one on repeat for my morning drive.

Overall, Seed is a solid sophomore effort, with a nice flow and an interesting take on a familiar sound. The record gets better as it progresses, so it should be fun to follow Looming in the future to see how they evolve. This is definitely worth a listen, and I’ll be sure to catch this band live if they come to a venue nearby! Natascha Hill