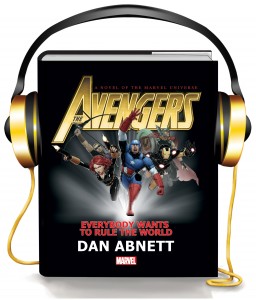 Buckle up for this ride! Earths Mightiest Heroes are scattered around the globe as they take on their most nefarious foes: Baron Strucker in Berlin, A.I.M. in the Savage Land, the High Evolutionary in Madripoor, Dormammu in Siberia, and, on the homefront, Ultron in Washington. Marvels Avengers typically stand as one, but how successful will they be when they are forced to divide and conquer?

Based on the original Prose Novel, AVENGERS: EVERYBODY WANTS TO RULE THE WORLD, written by New York Times best-selling author Dan Abnett, this adaptation from GraphicAudio comes alive with a full cast, music and sound effects to create an unforgettable listening experience. This exclusive first LISTEN gets you a seat alongside Marvels iconic Super Hero team while they embark on an all-new adventure across the planet!

Available from www.GraphicAudio.net and via the FREE GraphicAudio Access Mobile App which allows customers to directly download titles on their Android or iOS smartphones and tablets.