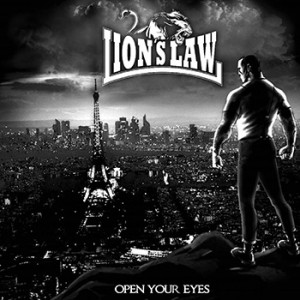 Lions Law – Open Your Eyes MLP/ CD (UVPR/ Contra)
In a short space of time, Paris band Lion’s Law have managed to catapult themselves right to the top of the worldwide oi! and streetpunk scene and so this new record comes highly anticipated. This was originally meant to be a new 7″ release, but there seems to be no stopping this lion’s roar and so instead they have spoilt their fans with seven new songs and an intro. Right from the beginning this picks up from where their debut album “A Day Will Come” left off. The intro serves to remind you how good this band is at writing catchy tunes, and the instrumental builds layers of guitars, piling on the atmosphere that smashes right into the first tune “Knock Em Out”. Whilst the music is catchy anthemic streetpunk rock, the lyrics on this and other songs on here are as aggro as they come, hard and uncompromising. And so the record continues, whilst I am missing the massive hit that was on the album (“Lafayette”) that can be found on the debut album, the band has come up with a consistently high quality record with no sign of any filler material and so overall this is a worthy successor. Lion’s Law is a band that thrives on big audience participation and on here there are plenty of choruses designed to be sing along to. I can’t wait to hear these new tunes live, in the meantime this will be put firmly on repeat so I can learn the hell out of a great set of tunes. Tom Chapman