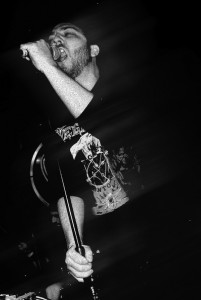 Southern Lord has announced the latest addition to the label, Like Rats, confirming the band’s crushing new album for March 2016 release.
Several members of Like Rats also hold rank in Chicago-based powerviolence/grindcore faction, Weekend Nachos, yet with this alter-ego, the focus of the beatdown is much more heavily influenced by death metal, with generous helpings of caveman swing, and with a catastrophic end result one may imagine by crossing the old-school slaughter of Incantation, Celtic Frost and Obituary over with the modern devastation of the likes of Nails, Black Breath and Dead In The Dirt.
Like Rats upcoming full-length, II,  delivers eight new tunes, with thirty-three minutes of pure savagery. Recorded by Andy Nelson (Dead In the Dirt, Harms Way), the Weekend Nachos crew has spawned an entirely different beast with Like Rats, and the damaging proof lies in the band’s Southern Lord debut. II will see release on LP, all digital platforms, and marks the band’s compact disc debut. The CD version will also compile every filthy note the band has ever recorded, including their previously vinyl-only releases and the new II album, with twenty-two tracks in total.
Like Rats will arise on March 25th through Southern Lord
(photo by Carmelo Espanola)