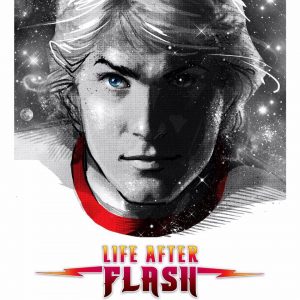 It’s not exactly a secret that I think that Flash Gordon is the greatest film ever made. And if you agree with me, well that’s great and if you don’t, well, I’m sorry but you’re wrong.  While it almost certainly isn’t a technical marvel of (relatively) modern cinema, it is a vibrant, energetic science fiction adventure yarn filled with strange and wonderful characters whose hero convinces the audience that anything is possible, because at the end of the day, he’s “just a man with a man’s courage”. I’ve never had the same sort of emotional connection with any other film, not even George Lucas’s original journey to that galaxy far, far away and to this day, I’ve always lamented the fact that Flash Gordon didn’t propel its leading man, Sam J. Jones to the dizzying heights of stardom afforded to so many other actors.

So when I heard, via the magic of the internet, that a documentary Life after Flash, was being made about Sam J Jones, his life and what happened following his cinematic turn as Flash Gordon, I knew I had to see it. No, not just see it; I had to find out everything I could about the film. Being the geeky obsessive that I am, I set about tracking down everyone involved with the documentary’s production, which in all honesty took about five minutes and before I knew what was what, and in less time than it would take Ming to blast one of his wives into space, I’d scheduled an interview with Life after Flash’s immensely likeable, charismatic, knowledgeable, fiercely intelligent, driven and focused director, Lisa Downs.  And this is what she had to say about Life after Flash and the harsh realities and hidden (and not so hidden) joys of what it means to actually make a documentary…

Find out more about Life after Flash here and here