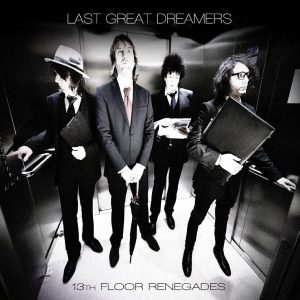 The majority need a pigeonhole so you can file things away nice and neatly to make everyone happy. You put this here, that there and, what’s this? Last Great Dreamers? Where the fuck do I file that? Cue much disarray and panic from the stiffs. Luckily, not everyone is the majority and some can let in a little sparkle and embrace those who are forever out of step and time.

Only to be outdone by The Quireboys in the outfit stakes, Last Great Dreamers unleash album number four. Yes, we can look back at the past and fondly remember the “what might what have beens” in the 1990s following Kerrang! nominations and yadda, yadda, yadda. With 13th Floor Renegades, and since their rebirth in 2014 really, the cheeky chaps are doing things on their own terms and they’re all the better for it.

The familiar bounce is on display with opener New Situation, complete with Roger Daltrey stutters, and Broken Things later on down the line cements the power pop prowess. The most telling lyric comes from the title track: “In my delusion, we could be champions.” If there was ever words to sum up the Dreamers’ tide swimming antics, then this is it.

Big choruses are aplenty courtesy of I Think I Like It and Who’s Side Are You On, whilst Miles Away plays musical homage to the Faces. A mid album diversion on For Your Information takes us down a swinging 60s Carnaby Street escapade with The Kinks and there’s time for an Ian Hunter wink on Primitive Man too.

Last Great Dreamers have called on every influence for 13th Floor Renegades, and that’s no bad thing. Play to your influences, twist them, add your own spin and have fun. They may still be too poppy for rockers and too rocky for poppers, but as the latter half of album closer Going Home rings out in a show-stopping Mick Ronson guitar haze, you can envisage the ticker-tape falling onto Slyder and Marc Valentine’s three button hand me downs. If the band name ever rang true, then it’s now more than ever. Ginge Knievil