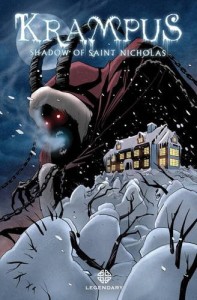 I’m not a fan of Christmas. In my experience, all the bad things in life, they always happen around the Festive Season, and being subjected to Fate’s vicious sense of humour, year in and year out, has reduced my ability to make merry with my fellow man. However, as much as the Spirit of Christmas has repeatedly jumped up and down on my clankers, my “suffering” at this most “wonderful” time of the year pales into insignificance when compared to the poor souls visited by the dark shadow of Kris Kringle in ‘Krampus’. I’m guessing that by now, and given our shared delight in the more morbid side of all things jolly, you know who Krampus is and if you don’t, google him. I’ll wait right here while you’re tapping and typing away on the internet.  You’re back? Good. He’s quite something isn’t he? Now imagine he decided, along with all of his “little helpers” to pay a visit to a small American town in order to unleash his wrath upon its residents in a multitude of horrific, gory and glorious ways. That my dears, is the idea that flows through the pages of ‘Krampus’, and in three seemingly unrelated tales, that are tied together in the final chapter, Krampus teaches his “victims” the true meaning of Christmas.

Whether it’s the bitter, drunken old Vet who remembers who he was before being scarred by war, the hate filled sister of a hit-and-run victim who’s quest for vengeance and justice has taken over her life or the rich developer for whom wealth and power have become more important than his fellow man; all are visited by the dark spirit of Christmas.  Blackly humorous and filled with more than liberal dose of horror, ‘Krampus: Shadow of Saint Nicholas’ serves as a companion piece to the film that shares its name, and if said film is even half as much fun as this book, then it’s going to easily  make my Festive Film Top Ten. The artwork is deliciously dark, the writing morbidly funny and there’s a sense of mischief running through every single page of this boo.  And even though it’s slightly let down by the overtly sentimental ending, I couldn’t help myself and ended up grinning from ear-to-ear as the tale of torment, misery and suffering gradually rolled toward its “happy” finale. So behave yourselves boys and girls, otherwise Krampus might pop down your chimney and pay you a visit, and oh, what sights he’ll have to show you. Merry Christmas… Tim Mass Movement