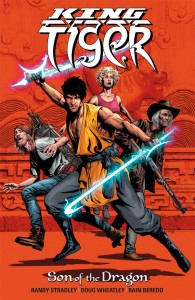 When war veteran Milo Sturges seeks help from a mystic, he has no idea how that advice will change his life. Change that come courtesy of, and thanks to, King Tiger. Not only does Tiger remove a Jinn from Milo but he also offers him the chance to become his assistant. All of which happens at exactly the right time for King, as his family come to collect him so that he can to fulfill his destiny and die, which will enable his mother to destroy Earth.

King Tiger originally appeared in 1993 as part Dark Horse’s Comics’ Greatest World imprint in a three issue series. Since then, creator, writer, and current VP of Publishing for Dark Horse, Randy Strandley, has kept his creation alive. Son Of The Dragon collects Tiger’s return in Blackout #1-4 and the mini-series King Tiger #1-4. Strandley’s story is both fast paced and fun and doesn’t slow down, and even when it feels like it should maybe apply the brakes, Strandley throws a curves into the plot which maintains its momentum. Doug Wheatley’s art is just gorgeous, the line work and detail that he puts into every panel is simply stunning. There’s enough hidden mythology engrained in the story to make me want to keep coming back and read the further adventures of Tiger, Milo, Rikki, and Lookfar whenever they’re published. Honestly, it can’t be soon enough for me and I can’t wait to see what happens next. Thoroughly recommended.  Jason Bonton