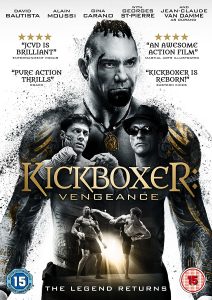 If you’re approaching, or have entered, middle-age, then the chances are that you wiled away a good portion of your teenage years and early twenties watching eighties and early nineties action heroes like Sylvester Stallone, Chuck Norris, Jackie Chan, Dolph Lundgren and Jean-Claude Van Damme decimate legions of bad guys for truth, justice, honour, family and a multitude of other chest-beating, very important reasons. I know I did (and still do) and I’m not afraid to admit it. Which is probably why, when Kickboxer: Vengeance turned up, I dropped everything that I was doing, ushered the women out of the house, turned the lights down low, the volume up, pressed play and let the ensuing mayhem consume me. And it did, with magnificently violent aplomb.

Basically, Kickboxer: Vengeance is an updated reimaging of Kickboxer, the film that catapulted JCVD to fame, and while the central, and very effective, plot hasn’t been altered (kickboxer dies in fight with so-called unbeatable champion after which his brother swears vengeance, trains like a man possessed and eventually faces his siblings murderer in single combat) all that much, Vengeance has expanded the characterisation, upped the fight quote and expanded the training montages. Which, as any fan of martial arts flicks will happily tell you is never a bad thing as, y’know, you can never have enough training montages, because they’re an integral part of the transformation process from underdog to merciless killing machine that every potential hero must undertake; and the longer they go on for, the more likeable the main protagonist becomes. Kickboxer Vengeance doesn’t pretend to be anything it isn’t:  it isn’t some deep, spiritual film that questions the nature of the Universe and doesn’t waste any time in getting to the nitty gritty of its story.  It’s an ode to the halcyon days of the high kicking, two fists flying martial arts films that used to line the shelves of video stores worldwide, and it does what it sets out to do in good humour and with plenty of brutal, no nonsense, jaw dropping kickboxing action.

Dave Bautista is perfectly cast as the monstrous Tong Po, while relative newcomer Alain Moussi uses his role as Kurt as a calling card to let the world know that he can do all of the insane moves that fandom craves ( you know the ones, the how-the-heck-did-he-do-that moves that everyone wants to see on screen), that he can do them better than anyone else and that he’s also a pretty good actor. Which in his profession and genre of choice is a devastating combination and something tells me (mainly his darn fine performance in this film ) that it won’t be long before he, much like his predecessors did before him, becomes the go-to guy in the world of bone crunching, adrenaline pumping epics.  Oh, and those muted whispers and half stories that you heard about Vengeance?  They’re true, the original Kickboxer Jean-Claude Van Damme also has a starring role, playing the trainer who prepares Kurt for his ultimate showdown And his turn as the world weary, seen it all before mentor is one of the highlights of the movie. He knows that he no longer has anything to prove to anyone, and as such, delivers a relaxed, confident performance and steals just about every scene that he’s in. Is it as good as the film it’s based on?  In terms of story, acting and action, it undoubtedly is, but there’s still that nagging sense of nostalgia for the original that makes me want to say it isn’t, even though realistically, I know Kickboxer Vengeance is a better, far more enjoyable film. The changing of the guard has finally arrived, and it’s time for the baton to be handed to the next generation. So it’s out with the old and in with the new… Tim Cundle