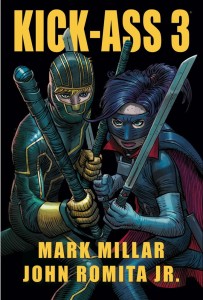 Kick-Ass 3 – Mark Millar & John Romita Jnr. (Titan Books)
About seven or eight years ago (please don’t ask me to be any more specific than that, I’m getting old and my memory isn’t what it used to be) I interviewed Mark Millar and as well as talking passionately about both ‘Civil War’ and ‘The Ultimates’, he also mentioned a creator owned book that he was working on with John Romita Jnr. called ‘Kick-Ass’. The more he talked about it, the more excited he became and his enthusiasm for it was infectious, so much so, that by the time the interview had finished, I couldn’t wait to read it. And now, after huge acclaim, twenty eight issues and two (so far) films, the story of ‘Kick-Ass’ has finally reached its, inevitable and irrefutable conclusion. It’s a sad day, but as Mindy and Dave face the final curtain, the one made famous by Frank and Sid, there’s no time for tears as our heroes barrel toward the bone snapping, blood soaked, bullet riddled finale at break neck speed, flipping the bird to, and mooning, mainstream comic ideology, crossing the finishing line backwards and on fire, all guns blazing and high fiving Lucifer. ‘Kick-Ass 3’, just in case you haven’t already guessed, ensures that Dave, Mindy, Chris and all of the other players go out exactly as they should. Not with a whimper, not with a bang, but in a bloody great adrenaline fuelled explosion that leaves it audience battered, bruised and begging for more. But as there’s not going to be any more (although you should never say never Mr Millar), you, me and everyone else, we’re all just going to have to make do with what’s on offer. So, are we sitting comfortably? We are? Good, then I’ll begin…

With Hit-Girl (Mindy) languishing in – or rather running – the penitentiary, it’s up to Kick-Ass (Dave) and Justice Forever to break her out and let her return to doing what she does best, punishing the guilty and taking the law to the lawless of New York. As with everything else in the world of Kick-Ass though, things don’t exactly go to plan and Hit Girl remains locked up just as life in New York takes a turn for the worse when Chris Genovese, with a little help from his uncle Rocco (the new head of the family and a man with a plan for the future of crime) miraculously gets out of jail. With the proposed unification of organised crime on the East Coast of America and crooked cops making life impossible and death easy for costumed vigilantes, dark days appear to fill the horizon. New York, now more than ever needs a hero to help clean it up. All this, and it all happens just as Dave gets a girlfriend and his life starts looking up, which is pretty much par for the course, and so with Hit Girl at his side again (Oh, and that’s not a spoiler, because you know, of course she gets out, d’uh!) Kick-Ass begins his suicidal war on crime. And like all wars, this one doesn’t end well and not everyone makes it out, or home, alive. After all, happy endings are for bedtime stories, and Kick-Ass 3 may be a lot of things, but it isn’t a bedtime story. A gloriously, pitch black, satirical, over-the-top dissection of super-hero mythology, an examination of humanities desire to hope and need to dream in an increasingly cold and joyless world and an exploration of the role of the underdog in society and the way we, as individuals, would like others to see us and the way we see, and would like to see ourselves it may be, but it definitely isn’t a bedtime story. Unless you want to wake up in the idle of the night, covered in a cold sweat, haunted by crimson soaked visions of violence on a scale previously undreamt of. Which, you know, if it’s your thing, is kind of cool. Demented, twisted and a little sick, but kind of cool nonetheless.

That said, ‘Kick-Ass 3’ is a darkly humorous, street level superhero adventure, filled with characters you actually care about, dialogue and in jokes that make you smile to yourself one minute and laugh out loud the next. It’s an engrossing, page turning story that’s been written and illustrated with passion, precision, flair and imagination by Messer’s Millar and Romita Jnr., and as last hurrah’s go, you’re unlikely to ever stumble across one half as good as this. Thank-you Mark and thank-you John. So long Dave, we’re going to miss you… Tim Mass Movement