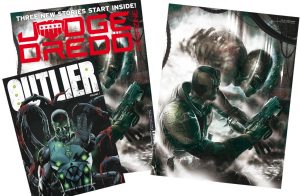 There’s never been a more mega time for Judge Dredd Megazine subscribers – they’ll now get a free cover print with every issue!

Readers who subscribe to 2000 AD’s monthly sister magazine, the Judge Dredd Megazine, will now automatically receive a free print of each month’s cover, shorn of logo and coverlines, as well as the regular 64-page mini-reprint trade.

Heading out to subscribers this weekend and hitting shelves on 17th January, Judge Dredd Megazine #392 will be bagged with a free print of Jake Lynch’s stunning cover art to mark the start of the new DREDD movie tie-in story, The Dead World.

Editions with prints are ONLY available to readers who subscribe through the 2000 AD website at 2000ad.com – as well as a free print and bagged trade every month, they’ll also receive issues days before they’re available in stores!

2000 AD editor Matt Smith said: ‘We’re making it better value than ever to subscribe to the Galaxy’s Greatest Comics, with added gifts and incentives for our loyal army of Squaxx dek Thargo. If you’re considering taking out a combi subscription to both 2000 AD and the Judge Dredd Megazine, now’s the perfect time to jump on board the Thrill-train – you won’t regret it!’

This month’s Megazine will also include a mini-trade collecting the first series of sci-fi body horror series Outlier by T.C. Eglington and Karl Richardson, as well as the concluding chapter to black and white World War II classic Wagner’s Walk from Tornado.