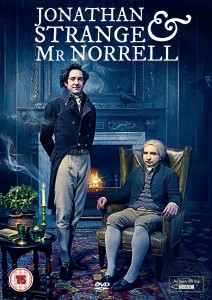 Jonathan Strange & Mr Norrell (RLJ Entertainment)
If Robert Browning had lived in the same alternate history and parallel world as both Jonathan Strange and Gilbert Norrell, then his most famous verse may very well have read “Oh, to be in England now that magic’s there…”, his heart filled with praise for sorcery and forgotten arts instead of the seasonal changes and nature’s raw beauty. For Strange and Norrell’s England was one shaped by magic, magic forgotten and abandoned by both polite and working society, but magic that thanks to Mt Norrell, with more than a little help from Mr Strange, is about to once again shape the fate of their sceptred isle. And it’s the reappearance of magic and the spells it casts on all whose lives if infects and infests that lies at the heart of ‘Jonathan Strange & Mr Norrell’, as the old ways and the new world collide, each fighting for dominance in a “war” that leaves it’s combatants broken and weary in the wake of an uneasy truce.

‘Jonathan Strange & Mr Norrell’ in essence is a period drama built on a fantastical foundation that poses the question “What if magic did exist? What if it was a tangible force that could be controlled and manipulated?’, and the further our protagonists (the only two magicians in England) are swayed by its charms, the more corrupt, alone and despised they become. It’s a story of love lost and found, of political machination and the unwritten (but well known ruthlessly enacted) vagaries of social position and its place in society, of the lengths that men will go to in order to taste power and the depths to which they inevitably fall when it is done with them, of bargains with dark force, ambition, loss, betrayal, manipulation, but more than any of those things, it is a tale of friendship and how that friendship is defeated by circumstance, fate, war and the petty jealousies of lesser men. Told through the brief magical careers of the soldier and the academic (Strange and Norrell respectively) who’s acquaintance shapes the future of England, direct opposites who’s relationship forges the world, and the lives of the people, who surround them. Through their comradeship, and lack of it, the story explores the eternal conflict between intellect and emotion, reason and instinct, the hearts and minds of men and the invisible war that shapes destiny.

It’s multi-layered plot with each arc leading into another, and feeding the main plot, the connectivity that flows through it mirroring the way in which magic is said to connect all things and people, seizes by the throat in the first five minutes, shaking you this way and that and up and down, but never lets go until the dying moments of the final episode. While the cast, as a whole, is superb, Eddie Marsan and Bertie Carvel as the practitioners of the forgotten art, and Marc Warren as their nemesis from the ill-remembered realm are breath-taking as the triumvirate around whom the story revolves, their madness, suffering, joy and pain brought to life with consummate ease, charisma and swagger. ‘Jonathan Strange & Mr Norrell’ is quite simply spectacular. Innovative, intelligent and enticing, and proof positive that all shows are not created equal. Some shows are far more equal than others, and this is the benchmark against which, from this moment on, all others will be measured. Superb… Tim Mass Movement