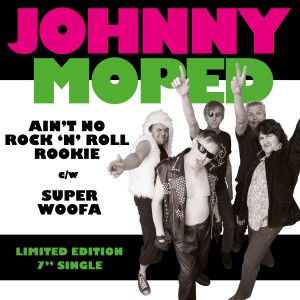 Johnny Moped – Ain’t No Rock’n’Roll Rookie 7″ (Damaged Goods)
Coming from a band formed in the first half of the 70s and boasting the likes of Chrissie Hynde and Captain Sensible as former members, I reckon the EP title is a true enough statement. Well approximately 85 years later, the band are back at it and on the strength of this record, well, they’ve still got it! This ain’t no watered down rock music from a bunch of people that have matured musically – the title song is a one and a half minute blast of raw punk, vocals spat out over a lofi tune, with a sly blues guitar lick thrown into the mix; this is prime Chiswick/ Raw records style gobbed out and finished before you know what hit you. The b-side “Super Woofa” is a more Blondie-esque affair, with Johnny trading off vocals with a female-backed chorus and again it works perfectly. This is a modern take on a sound that will never get old, and fans are gonna love it. Tom Chapman