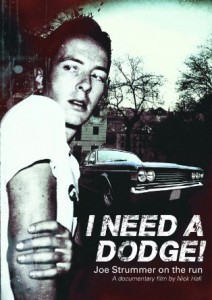 There are plenty of excellent Joe Strummer/ Clash documentary films widely available, but this film, directed and produced by Nick Hall focuses on what was essentially a break in Strummer’s musical career.

After the recording of Cut The Crap, Joe was starting to realise he had made some big mistakes in putting a new line-up of the Clash together.  He summarised the situation in the lyrics to This Is England when he sang “I got my motorcycle jacket but I’m walking all the time” – he knew he had lost the original feel of The Clash. During the same era – the wilderness years – Joe also lost his father, and so he chose to get out of the London rat race, and escape to Spain on what comes across as a soul searching mission.

This film follows the story as Joe escapes to Spain, and his mission to buy himself the Spanish version of a Dodge 3700 GT, a Barreiros. As well as buying the car he immerses himself in the Spanish culture and the music scene. The reasons for this are many – firstly in a quest to discover new sounds and inspiration, but also no doubt to put some space between himself and what he had left behind in England. We are treated to the style and sounds of the likes of 091 and Radio Futura and the tale of Joe trying to take them under his wing and share his wisdom with them, with very mixed results.

As the story progresses, we learn that Joe’s then partner was about to give birth to his daughter and demanded he be present. Joe immediately left Madrid and headed back to London. In doing so he abandoned his beloved Dodge somewhere in Madrid – and he couldn’t remember where he had left it.

Alongside contemporary interviews with various participants of this Spanish escapade, there is a little vintage footage of the 101ers but Clash fans may well be left wanting more, although it’s unlikely that there is much more undiscovered quality footage out there.

The packaging on this DVD is excellent, coming with a cassette of a radio interview, postcards and a Strummer dollar making this a real collector’s item, but overall this is probably one for Clash/ Strummer diehards. Tom Chapman