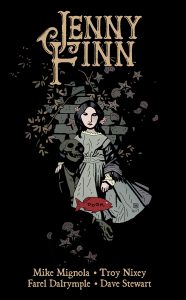 There are, despite what many brave souls may say to the contrary, places on earth that no man or woman was ever meant to explore without invitation and things that no individual should ever see. The perpetually snow swept peaks of the Himalaya’s that hide mystical Shangi-La, the clandestine secrets long kept by the unreachable extremes of the most remote rainforests and jungles and the deepest ocean trenches in which ancient Ry’leh and Atlantis lie submerged in eternal sleep and the myths, legends and stories that surround them  that have fascinated humanity for millennia. But just as it did the cat before us, our curiosity about these places and their secrets, will surely and certainly be the death of us all. And it’s from the darkest, strangest depths of unknown oceans that Jenny Finn emerges to wreak unwitting havoc on the denizens of the city that has forced her to become a stranger in a strange land.

Spinning a tale that feels like it was penned by Nick Cave in the midst of a fever dream after the spirit of Lovecraft whispered the blackest imaginings of Herman Melville to him, Jenny Finn weaves together monsters, deranged murderers, secret societies, horrific sickness and plague, a curious alternate Victorian society and a trio of hapless, innocent creatures caught up in the unrelenting and inescapable events unleashed and shaped by the greed, base desires and avarice of foolish men. Both the prose and art, the latter courtesy of the aforementioned Mr Nixey and Farel Dalrymple, lend Jenny Finn a haunting otherworldly quality that lets it teeter somewhere on the edge of your imagination as good and evil clash in a most unexpected fashion, with no clear victor emerging to claim the meagre spoils of the incredibly personal and at times, desperately brutal and vicious, conflict that lies at the heart of the story.  Exploring and examining the numerous failings of the human condition while briefly toying with the much maligned notion of hope, Jenny Finn has one webbed foot squarely in the mythos tradition made famous by Howard, Clark and Two-Gun Bob and another in the more esoteric and magnificently imaginative and inventive stygian fiction of Poe and Gaiman and proves my long held belief that Mike Mignola, this time with more than a little help from his newest apprentice in waiting Troy Nixey, is the modern day master of wonderfully weird and immediately appealing pulp fiction. Embrace the darkness… Tim Cundle