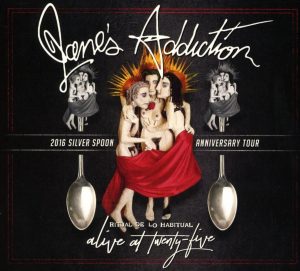 Wow…25 years and both me and Jane’s Addiction are still here… a minor miracle in itself. For me Ritual De Lo Habitual was one of the defining albums of the 90s. An eclectic mix of classic rock, folk, funk and punk that blew minds and shattered musical preconceptions. Well that was then and this is now – twenty five years later the band (featuring three of the Ritual line-up plus long term bassist Chris Chaney) reprise the full album plus a few Jane’s Addiction classics (‘Mountain Song, ‘Nothing’s Shocking’ amongst others) in a live set recorded at the Irvine Meadows Amphitheatre in California. Musically it’s spot on with the band faithfully reproducing classic songs such as ‘Stop’, ‘Been Caught Stealing’ and ‘Then She Did’ with a particularly stunning version of the 13 minute masterpiece ‘Three Days’ featuring the Foo Fighters Taylor Hawkins. Although the fragility of Perry Farrell’s vocals is fairly clear throughout the recording his vulnerability in delivering these songs was always part of the magic. A timely reminder of just how great Ritual was, and indeed still is. Unfortunately the DVD wouldn’t play so I can’t really comment on the visual aspect of this package. Ian Pickens