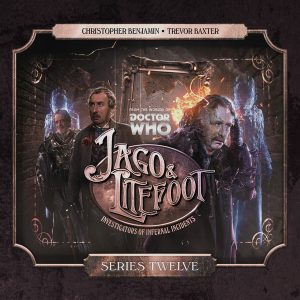 Gadzooks, have there really been twelve series of the exploits of vintage Victorian vigilantes? Lumme, it only feels like yesterday when they resumed their partnership to fight the forces of evil and the countless ne’er do wells intent on causing mischief in, and doing harm to London, the Empire and by extension, the rest of the world. Even though they’ve stood side by side and risked everything and more to always do the right thing, this latest brace of adventures revisits the formative days of their investigations as their mutual past finally catches up with them and comes back to bite them squarely on their posteriors.

Murder most foul, as it always does, plays a large part in this latest series of George and Henry’s adventures; and this time opens proceedings in grizzly fashion in Picture This, as theft and death visit an exclusive art gallery.  Drawn into proceedings by Inspector Quick, the duo soon find themselves trapped in a devilishly dark case of art imitating life while, unbeknownst to them, a viper hell-bent on doing them harm lurks at their heart of their bosom.  They say a picture is worth a thousand words, and the one stolen in Picture This fuels a mistaken case of revenge that spills over into, and leaves it’s mark on, The Flickermen in which the encroaching technology of the looming twentieth century meets the folklore of the old city compounding Henry’s woes as he and his partner fight to stave off an invasion of creatures from an uneatherly, other worldly place. Having saved the city again, and still determined to solve the initial homicide that started this hullabaloo and the spate of killings that followed in the wake of the first death, Henry and George find themselves ensconced in an all-girls school, caught up in a Hammer-esque mystery involving vampires, a baffling outbreak of staff deaths and secret societies in School of Blood as their hidden adversary gradually tightens the noose around their necks.  As the loose ends are slowly, and one by one, tied up, the final curtain beckons in Warm Blood in which their foes finally reveal themselves and our intrepid investigators find themselves battling for their very lives, and those of their fellow citizens, in a stupendous showdown against the forces of darkness.

Like the finest of fine wines, Jago & Litefoot just seems to get better with age, and even though Series Twelve forsakes steampunk and science fiction in favour of a more gothic gaslight horror inspired approach to story-telling, it’s still a more than worthy addition to the annals of its heroes’ mythology and legend. While Christopher Benjamin and Trevor Baxter are, as always, in superb form as the eponymous detectives, it’s also refreshing to see the often taken for granted supporting characters of Ellie (Lisa Bowerman) and Inspector Quick (Conrad Asquith) being given an expanded role to play in each of the stories, with the former being allowed to come to the forefront and take charge of what is, for long term fans, the shocking surprise twist upon which its foundation is built. The writing is, as expected, incredibly well honed, incorporating the dark humour and camaraderie that lies at the heart of George and Henry’s relationship into the clever, lightning quick narrative and drama with consummate ease. Time may be marching on, but it hasn’t slowed Jago & Litefoot and here’s hoping that it never does. Bally good show… Tim Cundle