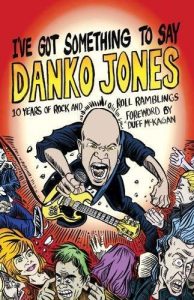 I’ll bet that, just like I did, as soon as you saw the title of Danko Jones’ debut book, you started singing the first line of the Misfits Last Caress to yourself. And you know what, that’s absolutely fine and dandy because I’m one hundred and ten percent sure that the author would heartily approve of you doing so. See, Danko Jones is the vocalist and guitarist in the band that bears his name, a band that has been releasing hard rocking records and hard charging around the globe playing anywhere and everywhere they can, and that will have them, for just over two decades.  He, and his comrades in arms, are testament to the adage that if you want something bad enough and you’re willing to put in the miles and the blood, sweat and tears, that you achieve whatever it is your heart desires. Of course, that fact that he’s also able to write killer tunes and play like an amphetamine wired Tasmanian Devil night after night has also helped his cause somewhat.  But who knew that as well as being able fry susceptible minds the world over with highly infectious rock’n’roll, that Mr Jones was also something of a modern literary philosopher possessed of gift for putting put pen to paper and creating incredibly entertaining, thought provoking and often hilariously funny columns, stories, comic strips and essays? Not me that’s for sure. At least, I didn’t until I spent an afternoon immersed in the pages of I’ve Got Something To Say*

Like Henry Rollins channelling the spirit of George Carlin while on a mission to single handedly save rock music from the suits and faceless corporate entities that would forever tarnish and defile it, Danko Jones isn’t afraid to tackle any subject or individual that incurs his wrath, happens to cross his path or just, you know, inspires his rabid, fiendishly clever, and sometimes completely out of left field train of thought.  From confronting his hatred of the useage of tomatoes as a burger condiment to challenging the acceptable and established order in which Black Sabbath’s recorded output should be worshipped through to offering possible solutions to increase the speed and efficiency at which people can move through an urban landscape and why Sacrifice are one of the most highly underrated thrash bands of all time** and serving up a multitude of stories from a lifetime on the road, Jones ruthlessly dissects each of his subjects with an eye for  the details that the rest of us have somehow missed in his own deft, accurate, clever and efficient style.  Engaging, highly enjoyable and never less than thoroughly entertaining, with I’ve Got Something To Say Danko Jones has proved to the world that he’s far more than just a six string slinging, rock’n’rock singing maniac; he’s also a finely honed and incredibly well tuned and focussed author. Danko Jones has something to say and it’s time that we all listened… Tim Cundle

*You did it again didn’t you?