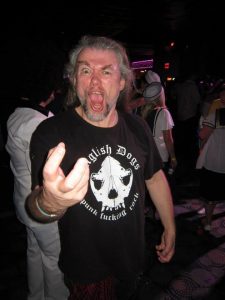 Most old punks of my vintage can date their epiphanal moment to 1 December, 1976, when the Sex Pistols got all sweary on Bill Grundy. However, mine goes back a few years earlier to a sunshiny day on 21 March 1970, when a 17-year-old girl in a white frock sat on a box and delighted a continent. That girl was Dana, the event was The Eurovision Song Contest, and from that moment on I was forever hooked.

Now I know what you’re thinking. Why should anyone in their right mind get all obsessed with a cheesy-assed pop show with no shouting in it? Well when the five-year-old me first got a glimpse of this pan-international showbiz extravaganza, it opened up a door of music and travel possibilities that has stuck with me to this day. For the first time in my young life I got to hear people singing in strange, unfamiliar languages, and began to piece together the map of Europe and its many curious cultures, and that made me want to race out there and taste some of it for myself. I followed the contest slavishly for many years, but as I got older and started playing in noisy-assed bands my obsession began to wane. I’d still keep a quiet eye on the results, but on the Saturday nights of my later youth I’d usually be out making a racket or pestering girls instead. But then, completely out of the blue, my passion was rekindled by a woman from Kanas called Katrina.

Together with her band The Waves, she’d unexpectedly won the 1997 running of Eurovision, which meant that the following year the contest would be held in the UK. I had to go. So I blagged a press pass through my local college mag, skipped off to the unlikely host city of Birmingham, and my life has never quite been the same again. 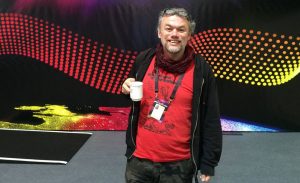 I was instantly addicted. One contest led to another, and I slowly worked my way around the continent, in a big, wobbly journey that has taken in strange and exotic cities like Jerusalem, Moscow, Baku, Tallinn, Istanbul, Helsinki and, erm, Düsseldorf, along the way picking up a network of friends that I’d number among my very closest. As I write I’m in the process of organising my twentieth visit to the contest, in Kiev, with a trip to the junior version in Georgia on the cards in November too. And better still, as a now professional journalist of some minor repute I actually get paid to go there.

And although I still play in terrible bands, and consider myself a punk rocker first and foremost, that cheesy-assed pop show takes up a bigger part of my working calendar with each new running. And whenever I hear that famous theme tune at the start of show, I often wonder if the five-year-old me could ever have imagined the fun and complications this contest would have brought me over the next forty-odd years. Well you try explaining to promoters why Hacksaw keep turning down plum gigs in May: “Yeah, sorry mate we can’t make it. The drummer’s at Eurovision…”

He also writes about the weird and scary songs that don’t quite make it to the contest on his blog Eurovision Apocalypse, which you can find here