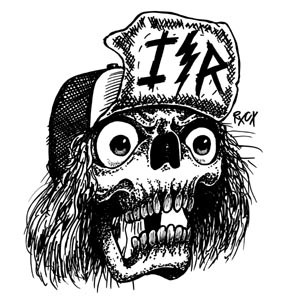 Iron Reagan / Toxic Shock – Split 7” (Reflections)
This is a short, but violent assault by NATO, the new North Atlantic Thrash Organisation. This side of the ocean is represented by Belgium’s Toxic Shock, with three songs. ‘The Survivalist’ and ‘Monday Is Cancelled’, however, show both, the serious and the not-so-serious side, of what this band is all about. One is about surviving cancer, while the other is about that day of the week we all hate, with a vengeance. The weapons of mosh destruction from the American side are brought to the table by Iron Reagan, who recently also released ‘The Tyrrany of Will’ through Relapse Records. The IR songs on the split are exactly what you can expect from these merchants of crossover. Let us not forget the killer artwork either, which is done by Ric Clayton (Suicidal Tendencies, Excel) Martijn Welzen