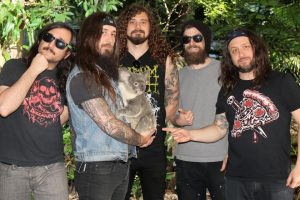 Formed in 2012, IRON REAGAN are no strangers to the fine art of crossover thrash. Comprised of scene veterans Tony Foresta, Phil Hall, Mark Bronzino, Rob Skotis, and Ryan Parrish, between them they fill, or have filled the ranks of Municipal Waste, Cannabis Corpse, Mammoth Grinder, Darkest Hour and numerous other bands. Since their inception, IRON REAGAN have toured the world almost non-stop, with high-caliber acts in the punk, hardcore and metal worlds such as Poison Idea, Napalm Death, Voivod, Skeletonwitch, The Black Dahlia Murder, GWAR, Seven Seconds, Eyehategod, etc. including appearances at Hellfest, Full Terror Assault, Brutal Assault, This is Hardcore, Party San Open Air, and numerous others.
Now in 2017, IRON REAGAN will release their third and best full-length album yet, Crossover Ministry.  Kurt Ballou was called upon to mix the record with guitarist Phil (Landphil) Hall handling the recording. Hear their vicious sermon on February 3rd at a circle pit near you, and stay tuned for song premieres and tour dates to be announced soon.