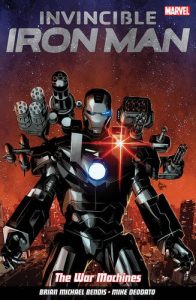 Having been a part of the Marvel Universe for more than five decades, Tony Stark lies at the heart of its bedrock and Iron Man has become a four colour institution whose fame has led to him becoming a household name the world over. There was a reason that he was chosen to launch, and lead, the current Marvel Studios charge, and the whole fame, recognition and being a core part of Marvel, well they’re it.  However, there is a problem with long standing characters, and that’s how to keep that hero, person, individual fresh, exciting and original. In short, the longer he (or she) is around, the harder it becomes to keep them from running out of steam. Luckily, Brian Michel Bendis is the current author of Tony Stark’s destiny and his fevered, rabid imagination ensures that not only is The War Machines an absolute joy to read, but it also keeps Tony Stark and his alter ego relevant to, and for, both modern audiences and us aging, long time fanboys. And his artistic comrade in arms on the book, Mike Deodato is no slouch either, and his vivid, fanatically precise and intricate work brings the technological wonders and characters of Iron Man’s world to fully formed and functional life.

The War Machines’ success rests on a series of brilliantly interwoven sub-plots that when combined, create an enthralling and compelling whole, seamlessly knitting characterisation, dialogue and plot together.  When Iron Man and War Machine find themselves hopelessly entangled in the schemes and machinations of a group of scientifically advanced and incredibly powerful ninja, they have no choice but to try and take them down the only way they know how, and when their initial attempt fails, the world, as a whole, becomes convinced that Tony Stark is dead when he disappears off the media radar. This wouldn’t be an issue if he was Mr Joe Average, but becomes increasingly problematic when you’re the CEO of a Global Corporation, and leads to things like an attempted take-over of your company by a jittery, nervous board of directors. With Tony half way around the world and supposedly dead, the would be mutineers and their coup can only be halted by one of the strangest partnerships in Stark Industries long history, who immediately roll into action in their bosses absence.  And then there’s the new “Iron Man” who, choosing her moment with the kind of precision that only a newbie could, appears when everything else is seemingly going to hell in an iron handbasket. That’s right, you read it here, Riri Williams makes her debut, and despite the negativity that’s been surrounding her in some quarters of fanspace, her first appearance is actually really enjoyable, and if it can be built on in the way that Bendis usually moulds his creations, she’ll fit into the whole superhero pantheon just fine.  So, how do you keep a character that’s been around as long as Iron Man has interesting? You do it like this. You do it like Brian Michael Bendis and Mike Deodato do in The War Machines…  Tim Cundle