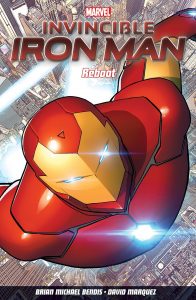 As most life-long devotees of the four colour universe know all too well; in comics, the more things change, the more they stay the same. It’s almost an unwritten rule that in the wake of massive upheaval, the sooner the reset button can be hit and the status quo re-established the better.  So, having been promised a ‘brand new chapter’ in Iron Man’s life by the cover synopsis and with cynicism and trepidation duly banished, I thumbed back the cover and began Reboot. By the end of the third page, following the return of an old adversary and her particularly merciless and callous introduction to the story, I was intrigued; by the end of the tenth I had read and re-read – with a grin plastered all over my face – Tony Stark’s opening monologue and been introduced to his new AI, and was already captivated by Invincible Iron Man. It had me, hook, line and sinker, and the more I read, the more I realised that Brian Michael Bendis and David Marquez had not only pulled a magnificent multi-coloured, multi-faceted rabbit out of the hat, they’d also managed to dazzle me with their close up trickery while making me gasp in wonder as the story and it’s beautifully rendered imagery slowly unfurled.

While, it’s true that Reboot is different to previous incarnations of Iron Man, and even though he’s trying to change on a personal level and adopt a (slightly) more mature and less selfish approach to life, he’s still the same Tony Stark.  He’s somehow, more human, more vulnerable and slightly less arrogant, which possibly stems from his recognition that’s no longer always the smartest person in the room. That said he just as cock-sure of himself, his suit and his abilities as he ever was. And talking of the suit, he’s got a new one. One that’s capable of doing everything that all of his old sets of Iron Man armour could, all by itself. It really is something to behold; and in a tale that sees him working alongside the – also new and improved – Doctor Doom (and with a little help from Tony’s new ‘awesome facial hair brother’, Doctor Strange) in an effort to stop the magical machinations and sorcerous ambitions of Madam Masque, that new suit is driven to the limits of its abilities and beyond.  Full of gutsy, punchy, emotive dialogue, rock solid characterisation and bursting with a fresh and vital energy and an underlying, knowing humour that’ll make you laugh, think and reconsider everything that you thought you knew about the previously mostly two dimensional Tony Stark, Invincible Iron Man in a frantically paced, five issue arc has leapt to the top of my pull list. Oh, and you’ll never guess who pops up , and into the book, to take over from Pepper. That’s right folks, it’s the only person who could emerge from her shadow and fill her shoes, it’s…. Ah, but that would be telling wouldn’t it?  If you want to find out, you’ll just have to read the book. Which you will if you’re one of the cool, happening cats. Why?  Because it’s brilliant, that’s why. Trust me, it really is… Tim Mass Movement