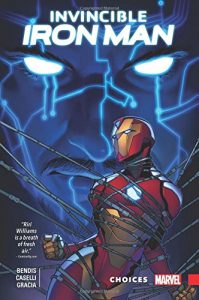 Tony Stark was, and is*, like the Marvel equivalent of Marmite. You either love him and the vast amount of personal baggage that he and his alter-ego carry, or you can’t stand him. There’s no middle ground as far as Iron Man is concerned. Me? Well, it wasn’t until I got a bit longer in the tooth and began to understand that the world isn’t always black and white, that everyone and everything exists in a perpetual shade of grey and nothing is ever straight forward or simple, that I actually found myself, begrudgingly at first, starting to like Tony.  Don’t get me wrong, while I didn’t always agree with him or the things he did, understanding the positions that he often found himself in and having to make his choices based upon those factors made him more relatable.  And then he died*. Or more accurately, became indisposed thanks to hovering at the point of death in a comatose state..

Fortunately though, his replacement was already on the scene, Riri Williams, a fifteen year old super genius who had designed her own suit of armour and in doing so, became Ironheart.  But Tony Stark has more than a few tricks up his sleeve, and having foreseen the possibility of his demise designed an Artificial Intelligence based upon, well, himself, and in Ironheart, it’s this AI that’s helping Riri to become the hero that she was born, and destined to be. Unlike her mentor though, Riri Williams is instantly likeable and her combination of insatiable curiosity, thirst for knowledge and an ability to see the multitude of shades that govern the world through the uncompromising eyes of a teenager make her one of the most engaging and interesting characters** to have emerged from the Marvel Universe in the last five years.

In Choices, Riri not only has to decide just where her future will take her, both in her role as Ironheart and on  a personal level, but she’s also thrown straight into the big leagues by SHIELD who are determined to recruit her.  In the aftermath of a terrorist incident, and having been the only hero to respond she becomes entangled in the rapidly disintegrating political struggle that’s engulfing Latveria and sets about fixing the mess that the “grown-ups” have made in a no nonsense, logical way that ignores all the pitfalls and traps of international diplomacy, that’s designed solely for the benefit of the only people in the situation that really matter. The men, women and children of Latveria.  As the diplomatic fallout and storm threatens to subsume her, Riri stands firm in the face of SHIELD and the potential onslaught and proves once and for all, that she’s made of the sort of stuff that all true heroes are and that Ironheart is more than capable of filling the void left by Tony Stark.

I am going to miss Brian Bendis’s deft touch more than I ever imagined I would.  By interspacing the ongoing story with flashbacks to,  and glimpses of, Riri’s history that help flesh her out and explain her motivations, desires, dreams and hopes, Bendis has created one of the most intriguing and enjoyable players in the Marvel Universe.  And coupled with an intelligent, driven, fast flowing plot, believable dialogue and eye popping and immediate artwork that leaps off the page, he and his co-creators have ensured that Ironheart is quite possibly the best superhero book to have hit the stands in the last couple of years.  At least it is as far as I’m concerned as its shot to the number one spot, with an iron clad bullet, on my pull list. It’s just a shame that Ironheart doesn’t quite fit the lyrics of that famous Black Sabbath song in the same way that Tony Stark masked identity did. Oh well, you can’t have everything I guess…  Tim Cundle

*You don’t really think that he isn’t coming back do you? Since when did being dead (unless you’re Uncle Ben of course) ever keep a superhero down?

** And yes, that includes Miles Morales who comes in a close second to Riri. Followed in joint third place by parallel / alternate Earth Gwen, aka Spider-Gwen, and Gwenpool.