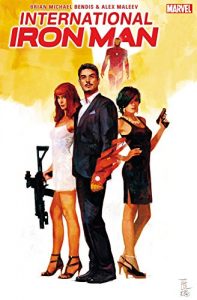 How does that old saying go? Ah yes, that’s right. You can choose your friends, but you can’t choose your family. For most people that’s etched in stone.  Most people though, don’t have the wealth, power and influence that Howard Stark did, a man to, and for whom the rules didn’t apply; a man able to, admittedly for the best of reasons and intentions, choose the heir to his empire. The trouble is, Howard never told his son he was adopted, and when Tony eventually found out, he decided to do what most folks in his position would. He set out to find out who his birth parents were and where he really came from. While that would be fairly straight forward for Joe Average, nothing is ever that easy for Tony Stark and International Iron Man is the spy riddled, espionage packed, terrorist filled tale of how old Shellhead found out who he really is.

International Iron Man does the almost unthinkable for a superhero book. It forsakes heroics (not entirely admittedly as there’s more than enough action to keep even the keenest purist happy) in favour of a more personal, intimate fable of lost love, betrayal and abandonment that veers between the past and present telling Tony’s, his father’s and ultimately, his birth parents’ tales. Someone once said that all stories are, to some degree, about fathers and sons, and International Iron Man follows that guideline to a tee, as it gradually emerges that the founding member of the Avengers defies the nature versus nature debate. Instead of being forged by either environment or genetics, Tony and Iron Man are products of both, incorporating the best and worst of each developmental factor. Surprisingly, and I may well be venturing into spoiler territory here, but what the heck, there’s a happy ending for once and come the final few pages of this very human tale of folly, pride, mistakes and redemption, Brian Michael Bendis crafts a finale that’ll bring a tear to the eye of the even the most cold-hearted cynic.  With Alex Maleev’s sumptuous art accompanying a flawlessly executed plot driven by detailed, rich characterisation and dialogue, International Iron Man draws back the curtain on Tony Stark’s personal undiscovered country and charts his expedition to explore and conquer it in a world beset by all manner of intrigue and villainy. His name is Tony Stark. He is Iron Man. And now, at long last, he knows exactly who he is … Tim Cundle