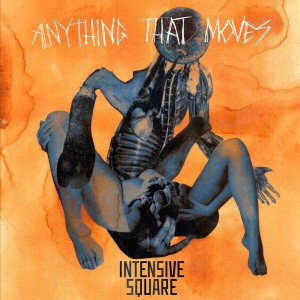 Intensive Square – Anything That Moves (Black Bow)
As the world around us has shown us more than once of the recent years, the more intelligent an army is supposed to be, the higher the body count. It’s strange in that aspect Welsh band Intensive Square have been called ‘knuckle draggers’ on several occasions. There’s nothing primitive about ‘Anything That Moves’. Yes it’s brutal, bloody and lethal, but, and I have history on my side on this one, it does NOT mean it’s about simple cave­-dwelling creatures, only capable of cracking your skull with uncompromising riffs. Like soldiers of a time to come Intensive Square can pierce any armour trying to stop them. Having listened to assorted bands they have gained both momentum and unexpected twists to dodge any counter attack launched, after which they are back at it with even more bloodthirsty verocity. It feels like the bluntness of Hatebreed or Pantera have collided hard with the madness of bands like Meshuggah and Candiria. Even a saxophone becomes an instrument of destruction in the hands of these lads. Martijn Welzen