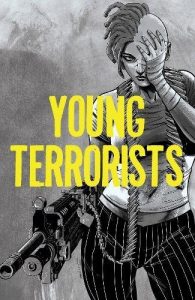 This May, Black Mask Studios will publish in book form for the first time ever YOUNG TERRORISTS, the first, incendiary collaboration by the co-creators of the CALEXIT comic book series. Three years ago, writer Matteo Pizzolo and artist Amancay Nahuelpan began a comic book series that portrayed a dark world of speculative fiction: a strange near-future where celebrities and CEOs run the U.S. government, internet conspiracy theorists provide counsel to political elites, and populist anger rages on all sides. The series was inspired by Pizzolo’s own battle with K-Street Lobbyists ten years ago.

“Although it may seem prescient, YOUNG TERRORISTS is inspired by my own run-in with the Washington DC swamp,” said Matteo Pizzolo, co-founder of Black Mask Studios and writer of YOUNG TERRORISTS. “I was running an indie film company, and I picked up a documentary about animal rights activists whose direct action campaign had a devastating impact on a leading testing lab. The non-violent activists went to federal prison as terrorists under the PATRIOT Act through a Bush-era law and the documentary was a powerful, though surprisingly evenhanded, story of their journey. I knew it would be controversial, but I believed in the film’s complex and empathetic message, so I decided to champion it. What I didn’t know was that one of the major Washington lobbying firms who had actually helped push the law through Congress had been hired by powerful animal-industry corporations to bury the documentary.”

“The result was years of my life spent fighting off scores of white collar trolls whose full time job is to make life miserable for anyone who falls into their Big Money’s crosshairs. Every day I was greeted by a new frivolous lawsuit, another movie theater dropping the film, another awful conversation trying to calm an old friend who’d received an anonymous phone call about some horrible, sordid thing I’d done in my past. (Spoiler: none of it was true). I even wound up on TMZ. Their job was simply to mess with my life, waste my time, and make my family miserable until I just gave up and dropped the film… which I refused to do. Most of us go through every day without ever having to deal with this power structure, but, if you happen to catch its attention, it suddenly feels like the entire world has just turned against you.”

In YOUNG TERRORISTS, a young heiress discovers her father is part of a tyrannical new world order. She vows to burn his whole empire down. Pizzolo explains, “YOUNG TERRORISTS seems prescient because the current Administration doesn’t even bother to pretend that our government isn’t run by CEOs and lobbyists. It’s a revenge story against the interconnected lattice of corporations, governments, and white collar jackals who work every day to make this world a more and more difficult place to do the right thing.”

The world of YOUNG TERRORISTS will continue this June in the upcoming series BILLIONAIRE KILLERS by Pizzolo and artist Soo Lee. In BILLIONAIRE KILLERS, two young women, Sera and Pru, heiresses to their industrialist fathers’ empires, who come to learn the patriarchs of their families earned their fortunes by causing global suffering, and then decide to go to war against their own parents.

The Los Angeles based indie publisher of acclaimed titles including BLACK, KIM & KIM, SPACE RIDERS, 4 KIDS WALK INTO A BANK, and THE DREGS, Black Mask Studios will publish YOUNG TERRORISTS in comic book stores on Wednesday May 2nd and in bookstores on Tuesday, May 15. The YOUNG TERRORISTS saga will continue in BILLIONAIRE KILLERS from Black Mask Studios in June 2018.