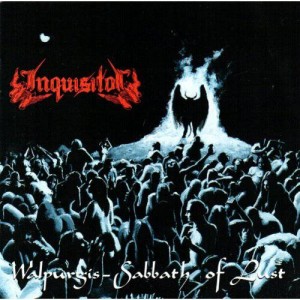 Inquisitor – Walpurgis – Sabbath Of Lust (Hammerheart)
Inquisitor was bold enough to release this album in 1996 originally. A time when thrash influenced extreme metal was past its peak. Sadus, Dark Angel and to a lesser extent Kreator had seen their haydays. This Dutch band couldn’t care less, and while feasting on the remains of the aforementioned they took things to an even further extreme. Insanely fast, high pitched vocals designed to pierce your eardrums with an unknown blackened force. It’s quite understandable why, almost 20 years later, this band is getting a completely overhauled reissue. It fits in with today’s scene a lot better than at the time of its original creation. The cd comes with a bonus disc called ‘The Demos’, which is also available as a separate vinyl release. Martijn Welzen